A Mammoth Wood Project from Start to Finish 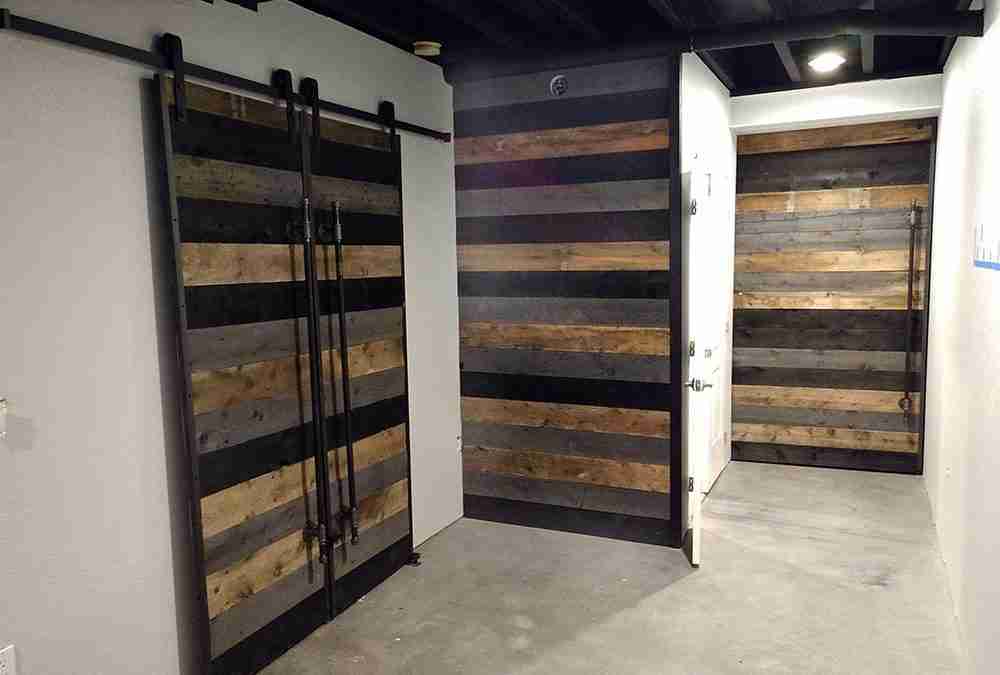 My day felt like a bust. Plenty of people came by my wood crafting booth at a local craftsman marketplace, but I didn’t sell a thing.

Then in the middle of the afternoon, a guy stopped by to talk about a project he had in mind. As we stood in the shade of my tent, he described what he was thinking about. It was obvious he was excited about this project.

I had built similar projects over the last year while working for another company so I was confident I could do a good job on his. My excitement grew as well.

As we finished our chat, he said he would call, but I didn’t get my hopes up.

But he did call.

A few days later, I stopped by his home where he showed me a killer man cave — pool table, ping pong table, air hockey, foosball, a dining table that sat 10 people, and a huge sectional couch facing three big-screen TVs. He wanted to enhance the man cave with six barn doors, an accent wall, and two cocktail tables.

He liked a rustic/industrial vibe and showed me pictures on his phone of examples of what he wanted. I wrote up a plan of what materials I would use and how I would construct the pieces, including pictures I took during my time with him. We went back and forth until we nailed down a final plan. I gave him a price; he accepted it; he signed a contract and gave me a down payment.

And I got rolling.

A friend of mine was rebuilding a homestead on her ranch in the Colorado mountains and had a pile of rustic wood destined for the burn pile. I made two trips down the mountain with the back of my pickup overflowing with her wood. Going over an 11,300-foot mountain pass twice was a bit exciting, but I made it.

To start the process, I created a test barn door using horizontal slats stained black, gray, and natural colors and placed in a varied pattern. I connected the slats with dowels and glue and then edged the sides of the door with angle iron.

I brought the door by his house, and it was exactly as he envisioned. The one change he asked for was switching the angle iron from the back to the front, which I did. This gave the door a cleaner look. I created the other five doors in a similar fashion.

After getting all the doors hung, we attached the latches and flat door handles. The client wanted to go big and bold with the main door handles, so we built handles almost five feet long using black gas piping.

PRO TIP: It’s easier to have a wood header attached above the barn door and then bolt the rail into the header. Barn door kits come with rails that are pre-drilled, that way you don’t have to do custom drilling. But I did learn a lot about cutting and drilling metal, which I hadn’t done much.

Next up were the cocktail tables. My client asked for 24” x 24” cocktail tables for friends to sit at while playing pool. He wanted the tables to be supported on the wall so his friends wouldn’t bang their legs on table legs.

Originally, we were going to use 2×4’s burned with a torch and then stained. I suggested an alternative using the 2×6 fence pieces I had, and he liked the idea after I created a sample piece of what it would look like. I put table tops together with dowels and glued, stained them black, and coated them with a water-resistant polyurethane. I then added 2” x 2” angle iron on the ends and attached them to the tops with lag bolts.

I tried using regular shelving brackets, but the tabletops were too deep and heavy. I cut and stained 1×6 barn wood and attached it against the wall to act as a support for the tabletop and for the iron piping I was using as additional supports. For additional support, I added 2” x 2” angle iron underneath.

PRO TIP: If you are using black gas piping to build furniture, you can get the piping cut and threaded at Lowe’s or Home Depot. It’s cheaper to do this rather than buying pre-cut pieces. Just make sure their machine is working. During construction the cutting machine wasn’t working at a couple of Home Depots we checked at, but I found one that worked at Lowe’s.

The accent wall was over eight feet tall and over four feet wide. I cut and stained all the wood in the workshop and, after marking out all the studs, attached the slats to the wall with 2” wire brads. We then trimmed out the right side of the wall with 2” x 2” angle iron, attaching it to the wall with lag bolts.

PRO TIP: With all the steel used on the doors, tables, and accent wall, I made many trips to Altitude Steel, a commercial steel business near downtown Denver. Lowe’s and Home Depot didn’t have the size pieces I needed. They did some fabrication when we needed special bends made. Also, there’s a fine oil on the metal, so I always clean it with steel wool and denatured alcohol, then sprayed it with a clear matte coating.

Originally this was not in the project, but the client was so happy with what we were doing, that he added a built-in vanity and shelves in the bathroom as well.

The new vanity was slated to go in an alcove in the new bathroom and had the same look as the cocktail tabletops – rough 2×6 wood stained black with 2” x 2” angle iron on the sides. We did the same treatment with the 1×6’s going up the wall underneath both sides of the vanity as support and also added the 2” x 2” angle iron. We also used wood shims to level the top back-to-front and side-to-side.

It was a bear drilling the holes in the vanity top for the drain and the faucet. We used a corded drill with the hole saws, so we wouldn’t burn out my portable drill.

Originally there was going to be a shelf on the bottom, but the client decided he wanted to put a trash can underneath instead. I also stained four pieces to cover up the front, but the client ended up using only one so he could more easily access the plumbing.

PRO TIP: The adage, “Measure twice, cut once” is true. I made a mistake measuring the width of the area the vanity was going into — it was eight inches too narrow. I had to create another top at the correct width, and I gave my client the mistake tabletop, which I’m sure he’ll put to good use.

The client had a tiled alcove 10” deep and 60” tall in their bathroom, where they wanted shelves to hold towels and toiletries. I prepped four pieces of wood for the shelves and cut 1 ½” angle iron to hold them up.

I tried using epoxy to hold the angle iron against the tile, but it didn’t work. I ended up drilling through the tile and supporting the angle iron with screws. We then held them in place with black bolts, nuts, and washers from the top to mimic the vanity top.

PRO TIP: Practice drilling tile on a scrap piece of tile before trying it on the wall. I bought a diamond tip drill bit, but it was slipping around too much on the test piece. I ended up getting a more pointed ceramic bit that worked better.

My client loved the finished product, and we have talked about adding more to this project. Next on the agenda is a 17-foot bar top that butts up against the wall on one end and has a waterfall edge on the other end. It will rest at a cocktail table level on a pony wall. The client also wants to clad the front and back of the bar with the same 1×6 wood as I used on the doors.

I was going to use the same wood as the vanity and tabletops but unfortunately ran out of my own wood. I did find similar weathered wood with the correct dimensions at a repurposed materials place in town. They also had the type of wood we need for the cladding at very good pricing, so I’m thinking this will be a good option to create the bar.

Read more about our custom furniture